I have an odd fascination with the brand naming of drugs.  The obscure words that they have made up really amuse me at times.  Of course I don’t think diabetes is funny, but Trulicity is the name of a glucose lowering drug. I mean, cmon.  The name doesn’t make me think diabetes.  And yet, this may become familiar with time, and synonymous with the medical condition it treats, just as Viagra, Benadryl, Claritin, Listerine, Advil, and Mylanta did, to name a few.  At first the names seem ridiculous, but there is a real process involved in naming them.  Parts of that process, are in fact, somewhat silly.  I will talk about that later.

The not so silly part is that there are actually 4 stages in the naming of a drug.  First there is the chemical name, which is scientific and based on its structure. Then it gets a company name while in development, which is often more of a code.  Next is a generic name, or INN, short for International Nonproprietary Name.  It is a unique word, which may or may not reflect the type of drug. They have a prefix- which means, well nothing.  They may have a infix, or not, and then they have a stem, which suggests the drug’s action. It also has to be able to be easily translated into other languages.  The last step is the brand name, or trademark.

For example, Lipitor’s generic name is atorvastatin.  It’s competitor is Crestor, whose generic name is rosuvastatin.  They both address high cholesterol. Then there’s Viagra, whose generic name is sildenafil. Cialis, another company’s name of choice for a drug that does what Viagra does, has the generic name tadalafil.  I think that Viagra got the better name, as Cialis seems just sort of sad.  With Viagra I picture Mr. Clean, all vital, and with Cialis, I picture a dog walking away with his tail between his legs, dejected. But that’s just me. But how do they REALLY pick those brand names?

My husband works in the pharmaceutical business.  He once was involved in the naming process of a cancer drug.  He proceeded  to reenact the highlights of the meeting that night at dinner, for my family.  To this day, if my children ever want to get me to laugh hysterically, they simply ask him,”Daddy, do the drug naming thing again”.  My husband is not someone I would think of as “funny” or a jokester.  But his deadpan delivery of the meeting would have, I think, secured him not only a return trip to the Johnny Carson show, but a Seinfeld-like series of his own.

So into his meeting walks a man and a women, with their powerpoint presentation.  They then proceed to throw out, well, gibberish, if you ask me.  They say one name after another, looking for reactions. So in his Tonight Show delivery, imagine Emeril Bagasse (as I have) as the guy saying the words, with all the excitement and gusto of Emeril’s “BAM!” So, he might say,

“Tru-lista”, with arms outstretched as a pretty women on The Price is Right might unveil a car or a boat. “Tru-LISTA”. or “TRU-lista”, emphasis on the first syllable this time. He says it loudly.  He says it softly… Then people give it a thumbs up or a thumbs down.  Some names didn’t make the cut because, part of the word would be judged as insulting in India (really happened). Or another person just simply doesn’t like works that start with T.

So he would then have his assistant take notes, repeating the comments, and she would enter them on her computer.

Picture the assistant, as I have, looking much like the woman who plays the mom on That 70’s Show. She also played Jerry’s agent on Seinfeld, and Tom Hanks’ secretary in Big.  Anyhoo, her job, that she got paid cash money for, is to take notes on the fact that some scientist didn’t like drug names that start with T! And a team of people also provide for their families by providing made up words for drugs! Yup. That’s it.  Ok, they must Google to make sure that no one else has ownership of the random words that they have presumably made up.  But for real, this is the job that I think I was born to have.

For that matter, I think that veterinarians do a better job than physicians, in general, in this department. We don’t give drugs, or diseases, for that matter, confusing names. The veterinary profession actually refers to a particular disease of sheep as “Big Head Disease”.  I kid you not.  You can look it up.  Of course it has another long latin name, but generally we are pretty straightforward at naming things.  There is Heartworm disease, which is a disease caused by worms, IN THE HEART, and heartworm preventative, which, you guessed it, PREVENTS HEARTWORM DISEASE. There is a product called Skunkoff and even a carpet cleaner called Antiickypoo.

I think I have a particular talent at this naming business.  Here are some of my ideas.  Think simplify.

So think about that the next time you watch one of those commercials. 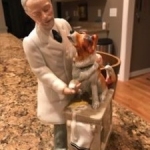 This woman in veterinary medicine Next 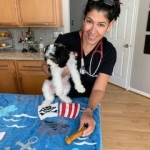