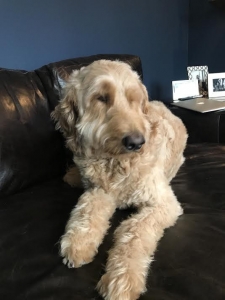 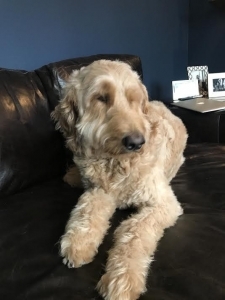 In addition to writing my blog, I enjoy contributing to the Philadelphia Inquirer newspaper.  They have a popular weekly  Medical Mystery column, which focuses on a human or veterinary “mystery” case, intriguing readers, and then sharing how the case was “solved.”  One such case of mine that I shared was that of Oliver, a 2-year old Goldendoodle.

I was called to his home because, as much as his family adored him, they did not adore his bad breath.  His exam revealed advanced dental disease and a malodor.  I recommended a dental cleaning and more detailed exam under anesthesia, which required a bloodwork assessment prior to the procedure.  The blood results showed an elevation in his symmetric dimethylarginine (SDMA) value, an early detector of kidney disease.  This was unusual for his age, and we hoped it was simply an early sign of a urinary tract infection and not something more alarming, such as a congenital kidney abnormality or early kidney failure.

A repeat blood test showed that the SDMA remained elevated and now indicated that his protein level was low.  This entire time, Oliver was eating and acting perfectly normal, and yet, I had this nagging suspicion that something was really wrong, and it needed to be figured out before we cleaned his teeth.  This might have been difficult to impress upon a less understanding family, but his wonderful pet parents agreed to further testing.

Just before looking at his kidneys and other organs with an abdominal ultrasound, I started thinking about underlying, silent diseases that might stress otherwise normal kidneys in such a young dog.  Addison’s disease -yes! the same condition that affected President John F. Kennedy – came to mind.

Oliver’s family was familiar with the disease, as a friend’s dog had it, but unlike that case, Oliver acted normal, and his blood did not show an electrolyte abnormality, a hallmark of the disease.

So what was going on with Oliver?

Solution:  In Addison’s disease, the patient’s own immune system attacks the adrenal gland, leaving it unable to make critical hormones.  Typically, patients have had a history of repeated bouts of vomiting, diarrhea, and needing to drink a lot of water and often present as a medical emergency when undiagnosed for too long.

Further testing of Oliver revealed that his cortisol, a stress hormone, was very low.  That led to one more test: an adrenocorticotropic hormone (ACTH) stimulation test.  It proved that this gland was not up to the challenge of making more stress hormone when needed.

Voila! Oliver did have Addison’s disease, also know as primary hypoadrenocorticism, but his was a form that we call atypical Addison’s, making it more challenging to catch.

A properly functioning adrenal gland has two layers.  One makes cortisol, the hormone Oliver didn’t have, which normally is released as a “fight-or-flight” response.  The other layer makes aldosterone, and without it, patients can have life-threatening imbalances in electrolytes, such as sodium and potassium.  Their blood pressure may plummet.  Most dogs with Addison’s have this form.

Purebred standard poodles, Wheaten terriers, and Portuguese water dogs have a genetic predisposition for the disease.  Labrador retrievers, and a less common breed known as Leonbergers, also have an increased risk. . Yet, it can occur in any dog and very rarely in cats.

We gave Oliver the appropriate steroid supplementation, and his kidney values reverted to normal, but very soon after, his blood work showed a telltale electrolyte imbalance, so he also ended up needing monthly injection of a drug called Percorten-V for the rest of his life.  He became a more typical case of Addison’s disease,.

With his Addison’s under control, Oliver – to the relief of those who love him – got that long-awaited dental cleaning. 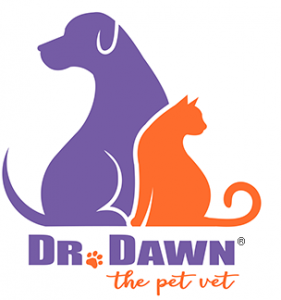 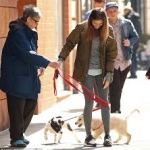