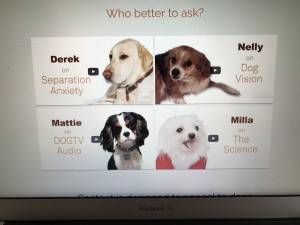 I recently was browsing the tv cable guide and noticed a channel called Dog TV. I initially thought it was  a channel with lots of cute pictures of puppies, intended to relax me after a long, hard day. I was wrong. It is intended to entertain dogs that spend much time alone. Evidently, they offer a free trial for Xfinity subscribers, and I just “lucked” onto it during this time period.

This is an interesting picture from their website, which links to videos narrated by dogs, explaining the benefits of the channel. Separation anxiety prone dogs have something to distract them from their pet parents’ absence, for example. Also, they address the differences in vision that dogs have, compared to humans. Dogs are somewhat color blind, in that they do not have as many cones in their retinas, which  makes distinguishing between certain colors a challenge.  So they edit with more vibrant colors, similar to photoshopping a picture and saturating the images.  They compare screens as humans see the image, vs the dog version, and then enhance it. Actually quite interesting.

Cat lovers, there is also an internet streamed channel of cat tv. It is called Pluto.TV, and has “Cats 24/7”, and is mainly powered by YouTube clips. Yet, this is devoted to simply looking at cats. It is more geared for people, other than the cats themselves.

I was intrigued by the Dog TV concept, and set about determining if it appealed to  my dog India.

This task is not as easy as you might think.  It is difficult to see if she is interested in the television while we are there, basically, staring at her. Does she even “see” the images on the tv? Does she care that a German Shepherd chased a tennis ball into a built in pool, to be filmed underwater? Hard to say.

My husband is a physician. Even better, he is also a pH.D., and he designs clinical trials for a living! Perfect! We, together, were going to get to the bottom of this! We were going to design an experimental trial, with India as our only patient. As objectively as possible, we would determine if she enjoyed Dog TV.

Our first task was to lure her away from her nap, sleeping unfortunately below and to the side of the television. I proceeded to drag her onto my lap, acting nonchalantly the entire time. She, evidently, subscribes to the belief that one should “let sleeping dogs lie”. She seemed confused that I randomly decided to give her a belly rub, exactly 7 hours and 15 minutes earlier than her typical belly rub.  AND, it was on the wrong couch. Soon, though, she succumbed to massage joy, blissfully unaware that I had positioned her head facing the screen.

This image, of someone mountain biking, did nothing for her.

These dogs frolicking in a park seemed like it might possibly interest her. I waited for her body to bolt upright and hoped for some barking at the screen. She did not react. I could not feel a flexed muscle on her entire body.  I whispered to my husband, “Is S-H-E looking at the screen?” He couldn’t tell.

A few minutes later, I asked whether her eyes were even open. He couldn’t determine that either, as her head kept bobbing onto my lap. Clearly, I couldn’t turn her around to see, as the “experiment” was designed for Dave and I to observe her, discreetly.

Just when I had come to the decision that my dog was a disinterested dolt, she popped up, as did her ears! What seemed to pique her interest were two adorable Cavalier King Charles Spaniel puppies. Now this was  data! I found myself calmly explaining to her that, in fact, her mother is a Cavalier. Could this be the breakthrough I had been hoping for, with a link to her past all rolled into one?

Not so much, it turns out. She bolted off my lap, seconds later, because a peanut butter jar had been opened in the kitchen. So, my first impression of Dog TV is that it’s probably not for my dog. I don’t want to speak for anyone else. If your dog loves it, I would love to hear about it.

Dave turned to me, and simply said, “Are we done here? Can I change the channel?” Of course it was time to change the channel. Still, I did learn something from my experiment. That is, my husband can be a very patient man. There was ESPN, or a golf tournament to be seen, no doubt. Instead, he sat there, indulging me, while I took photos, etc. I may not have a clever dog, but I am a lucky girl. In fact, I have an anniversary of 32 years of lucky this June. Dog TV served its purpose of reminding me of that fact. 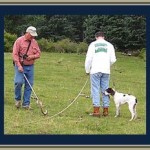 Yoga and pets. Next 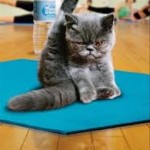